The Earth can generate profits from within it just like diamonds from the depths of the darken mines or crooked carrots, as an evidence of its fertility. But to do so, Earth demands us to devise techniques to cultivate it effectively.

Nomadic Herding involves the raising of livestock. It is performed by moving livestock

from one place to another in search of natural pasture, food, and water. Different types of animals are reared in different regions. Nomadic herding is mostly carried out in the semi-arid and arid regions of Central Asia, Northern Africa and some parts of Arabia.

In this type of cultivation, farmers occupy an area of forest and use it for growing crops. They clear the forest by cutting down the trees and then burning the land. Crops are grown in that area for a few years until the land becomes barren and native flora like

weed starts growing there. Farmers then move to some other area and the process continues like this. Shifting cultivation is practiced in tropical regions where there is abundant rainfall.

Subsistence farming is practiced to fulfill personal needs only. The farmer lives on a small amount of land and grows crops for producing enough food for his/her household. 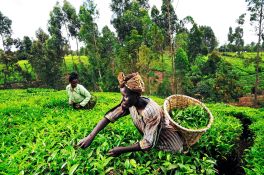 It is mostly practiced in monsoon areas.

Intensive farming is carried out mostly in developed countries. A large number of inputs 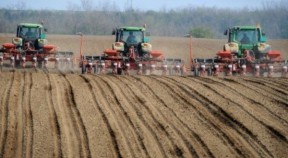 are used to produce higher crop yields. It is the most commercial agriculture which produces profit for the countries.

As technology is changing day by day, the demand for innovative agricultural techniques is also increasing. Over 90% of the world’s farmers are making use of modern and ingenious methods for producing enough food, fiber, fuel, and raw materials. Nowadays, the main goal of farmers is to minimize the time consumption and produce higher output so that the demands of an increasing population can be met.

It is estimated that by 2050, the world’s population will grow until nine billion whereas the proportion of arable land will decrease. To meet the increasing demands and needs, farmers are using new scientific methods to produce affordable and sustainable food. Revolutionized techniques result in less human labor but high environmental cost. Following are some modern profitable and unique agricultural techniques which can play a major role in producing the high-quality output:

Aeroponics farming is all about growing plants in the air. Amazing, right? Plants are grown suspended in the air, unlike geoponics in which plants require normal soil for growth.

The word “Aeroponics” is deduced from two Greek words; “aero” meaning air and “ponos” meaning labor. Aeroponics is a modern farming technique in which plants are grown in air or mist environment without the need of soil. In aeroponics farming, plants are suspended in a closed environment or apparatus in which the roots of the plants are sprayed by efficient and supplement rich water arrangement.  There is no contact between the plants and the apparatus which makes the plant to grow fully in the air.

The surroundings of the plants can be controlled and protected by pests and diseases which results in healthy plants and quicker plant development. Other environmental parameters like temperature and humidity are also controlled for the better growth of plants. Almost every plant can be raised through aeroponics technique. Vegetables such as lettuce, basil, and tomatoes are grown successfully with the help of this innovative agricultural technique.

In 1957, F.W. Went was the first person who authored the air-developing procedure of growing plants as “aeroponics”. He developed espresso plants and tomatoes with air-suspended roots and applied a supplement fog in the root area. In 1985, Stoner was the first person who commercialized aeroponics for the first time. His company, GTi grew fresh aeroponically grown food on a large scale for commercial purposes. Stoner is considered as the father of commercial aeroponics.

Hydroponics is a method of farming in which crops are grown in water solutions instead of soil. The word “Hydroponics” is derived from a Latin word meaning working water. The roots of the plant are in direct contact with mineral nutrient solutions with water solvent and have full access to oxygen for healthy growth.

Deepwater Culture is the easiest process of Hydroponics in which plants are suspended in a solution of oxygen-rich water and nutrients. This method is beneficial as it provides a maximum supply of oxygen for healthy and quick growth of plants.

In this technique, a continuous flow of nutrients and water is provided to the roots. The tips of the roots are in direct contact with the nutrient solution which provides a better supply of oxygen, hence aiding in optimizing the rate of growth.

Aeroponics is a method of Hydroponics Technique in which roots are suspended in air and are periodically sprayed by nutrients solution. 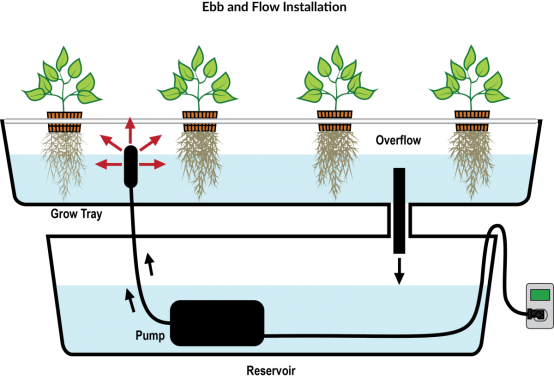 In this mechanism, a tray is placed over the nutrient solution. Plants are then placed on the tray either by loading it with sand granules or placing pots. A pump fills the tray with nutrient solution at regular interims. When the tray is overloaded, it is drained back into the reservoir.

In a hydroponic drip system, nutrients are provided to the hydroponic medium slowly. Slow draining medium is recommended for this system. A major drawback of the drip system is clogging. Drippers can get clogged because of the nutrients present in the emitter.

The growth of plants is optimized by 25 % and production is increased by 30% because the plants will get the exact amount of nutrients needed. Hydroponic systems also require less amount of water as compared to soil because the system is enclosed and there is very less evaporation.

Hydroponic systems require a great amount of care and such systems should be monitored regularly. Therefore, it takes up a lot of time to manage hydroponic systems. If there is any pump failure, then your plants will be damaged within a very short period of time. Hydroponic systems are expensive and it takes time to set these systems up.

Hybrid seed technology involves the cross-pollination of two different but related plants to produce a hybrid plant which contains desired traits of the parents.

The first person to identify hybridization in plants was Josef Kölrueter in 1760. He came to the conclusion that hybridization mostly occurs if the habitat is disturbed by humans.

Hybridization occurs when a pollen grain from one flowering plant is dispersed widely and then it lands on flowers belonging to different species. Hybridization helps in producing improved yield, refined colors, and more disease resistant plants.

Some examples of hybrid plants include grapefruits, sweet corn, seedless watermelons, and cantaloupes.

Backcrossing, which is the interbreeding among cross breeds and their parental species, can exchange alleles from one parent to the next utilizing the interspecific half and halves as a hereditary extension in a procedure called introgression. Introgression builds the hereditary variety of either of the guardians.

Hybridization between ingrained lines can result in cross breeds that surpass at least one of the guardians in size and conceptive potential. This expanded imperativeness is called half and half energy and has been concentrated since the season of English naturalist Charles Darwin. Harvest yields increment drastically (as much as 100 percent) when hybridization is utilized along these lines. In the twenty-first century, more than 90 percent of the corn developed is originated by hybridization.

Recirculating Aquaculture System is a system of farming fish under controlled conditions. Fish farming is one of the most developed and growing sectors of agriculture.  But fish farming also comes with some problems like water management, lack of land, increased diseases and ecosystem imbalance. Recirculating Aquaculture Systems are used to overcome all of these difficulties.

RAS includes big tanks where fish and other aquatic animals are produced by the use of biological filters. Water is continuously filtered out to reduce ammonia toxicity and cleaning of water. The water is recycled and used again after being treated. This results in less use of water as compared to other aquatic farming techniques.

In this step ammonia excreted by fish as a waste product is converted into nitrate with the use of biofilters. Nitrate is much lesser toxic than ammonia and it can be removed by changing water or denitrifying filters.

Solid Particles can be removed by sand filters and drum filters. These filters can be used to flush out sand particles from the tanks and purify water.

Temperature need varies in different fish, therefore, the temperature of the tanks need to be controlled according to the nature of that particular fish. Some fish require warm water while some survive in cold water. Different kind of chillers and heaters are used to balance the heating and cooling of tanks as per the requirements.

covers. It allows growing crops under controlled climatic conditions. In cold weather, the internal temperature is always warm due to the greenhouse effect.

Crops that can be grown by polyhouse technique are Strawberry, cucumber, Papaya, Capsicum, Cauliflower, Cabbage etc.

Milky Mushrooms are artificially cultivated mushrooms grown in the forest regions of India. Its cultivation started in 1976 in the state of West Bengal. It is scientifically known

as Calocybe indica. It is long in size and white in color.

Paddy Straw is cut down into small pieces which are then soaked down in water for few hours. Afterward, these are pasteurized for removing microbes. Straw is pasteurized by submerging it in hot water. The substrate is packed in polythene bags for sterilization. 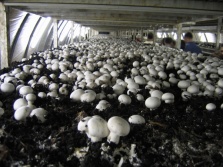 Spawning is done with the help of a high dose of spawn dose. Afterward, polythene bags are moved to cropping room where casing and cropping are accomplished. Mycelium takes almost 10 days for appearing at the top. Mushroom crops are harvested within a period of 40 days.

Drip irrigation, also known as trickle irrigation, was first developed in Israel. It involves sprinkling water at the roots of the plants drops by drop. Spraying nozzles are attached at the around the plants to irrigate specific areas of plants. It is efficient and easy irrigation method as it saves water and reduces water consumption. Highly developed equipment and trained labor are required for this irrigation system.

Agroforestry involves farming trees in forests. It is the combination of agriculture and forests. It is successfully practiced in sub-Saharan areas and some parts of the United States. Agroforestry can result in higher yield production with less cost.

Agroforestry is able to control soil erosion, reduce water loss, maintain soil organic matter, reduce waterlogging, and maintain soil fertility. It can also help in increasing nutrient input by soil horizons and weathering rocks. Soil toxicity can be monitored and removed. Due to the different heights of the trees and plants, more solar energy can be utilized. Pests attacks and diseases are likely to be reduced in Agroforestry. Agroforestry service can give an increasingly various ranch economy and animate the entire rustic economy, prompting progressively stable homesteads and networks. Financial aspects dangers are decreased when frameworks deliver numerous items.

Please leave a comment as it really matters. Your comments are our energy boosters Cancel reply